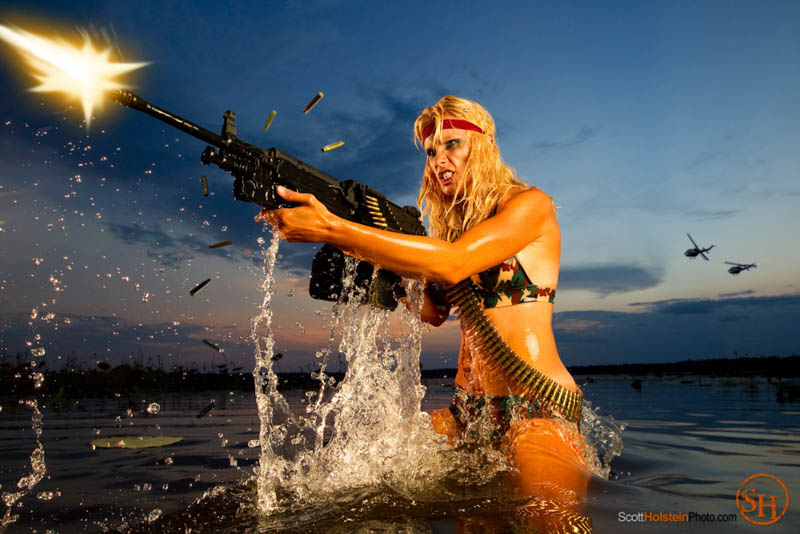 A warrior woman (a Rambo spoof), emerges from the water at sunset while firing an M249 machine gun as the water splashes around her. 1/160 f/9 at ISO 800. Purchase prints or license this image.

“Rambabe” is my latest personal project, done just for kicks as a creative recharge. It is, of course, inspired by the Rambo movies; I own the ’80s trilogy. While watching it one day I decided it would be fun to make creative images that change it up a bit and have a beautiful, tough woman as the “one man army” instead of a sweaty dude (no offense, Stallone).

And since I’m from Florida, there was never any question that she would be in the water. I scouted several places in the Tallahassee region, originally looking for something swampy  that might be able to pass for Vietnam, but I decided on a more open-water location with Lake Jackson so I would get a clear view of the sunset. A warrior woman is partially submerged in a body of water at sunset with an M249 machine gun. 1/250 f/10 ISO 800. Purchase prints or license this image.

I rented a rubber replica of an M249 machine gun and fake ammo from a prop house out in L.A. (OK, I admit it; it was a rather arduous process; “I’m not going to rob a bank, honest!”).

I wanted to do a behind-the-scenes video again (embedded below) to show the creative photography process from conception to realization. This time, though, I wanted to play with the high-definition video capability of my Canon 1D Mark IV and create a quick, film-like intro to set the stage for the photo shoot. In addition to the gun, I also rented an old military radio and microphone just for the intro. We filmed a short parody of a scene from Rambo: First Blood Part II, my favorite of the trilogy.

The beautiful Christine O’Connell brought Rambabe to life, donning a camouflage bikini and braving the lake at sunset with her warrior game face on. For the photos, I lit Rambabe with a couple of Canon speedlight flashes, which I mention in the video below.

Carlin Trammel of Stormspeed Entertainment did great video work again (he also did the behind-the-scenes video for “Quagmire”). Marc Thomas did post-production work on the photos, Rebecca Lehman did Rambabe’s makeup, and Rick Jackson wrote the music.