Firefly Photography in the Mountains 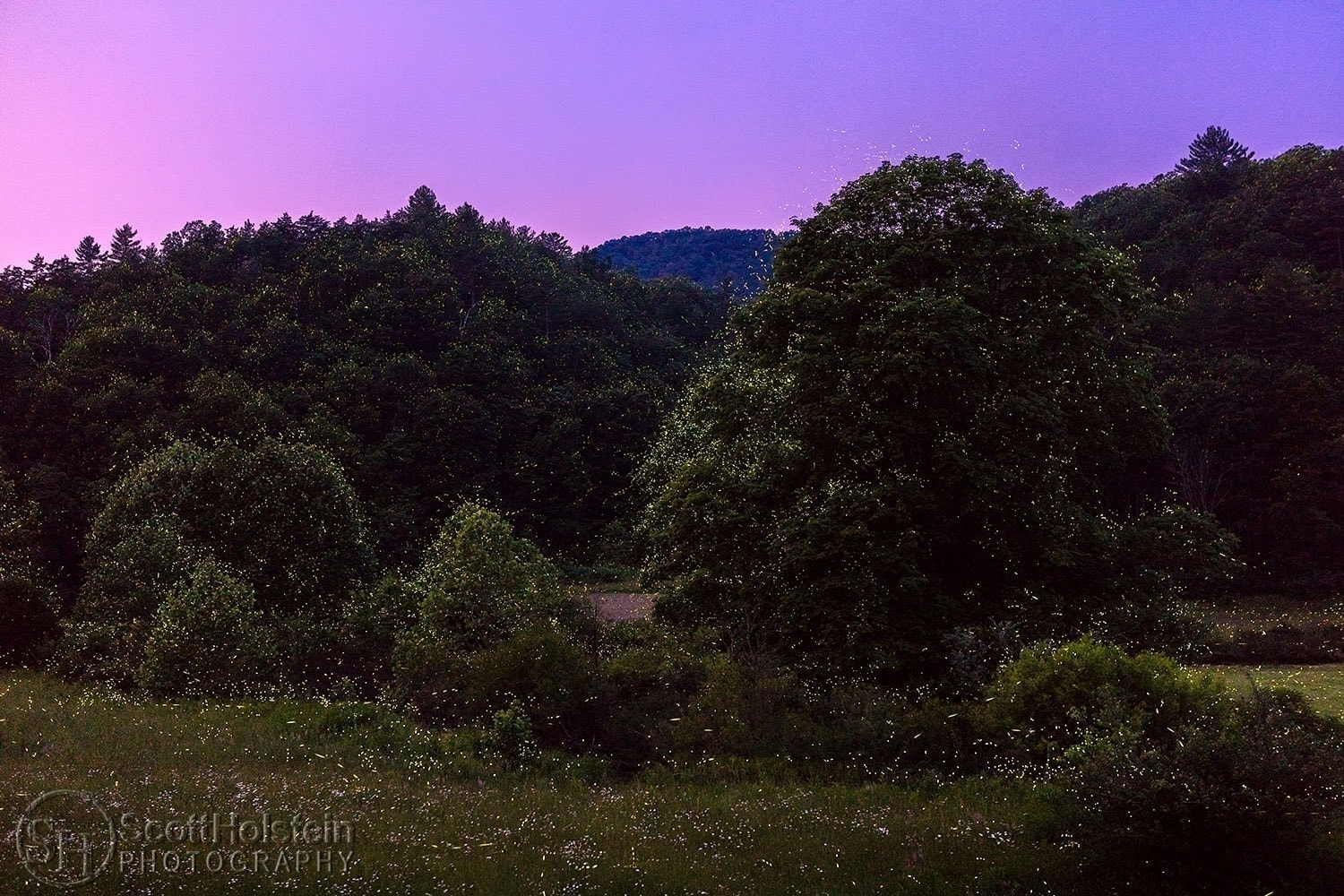 This past summer while in the mountains of West Virginia, I stumbled upon an amazing scene one evening. I had taken a drive in the country not too far from the famous resort, The Greenbrier, in White Sulphur Springs. I was in an area with lots of fields butting up to the Monongahela National Forest where we often go deer viewing before sunset. However, this time, as dusk approached, a different critter appeared in numbers. As the fields darkened, thousands of fireflies began twinkling, from down low in the grass to up in the tops of the trees. It was as though I had gone on a drive to view Christmas lights in the middle of the summer. As the lightning bugs were so numerous, their lights were not occasional, but constant – here, there, everywhere. 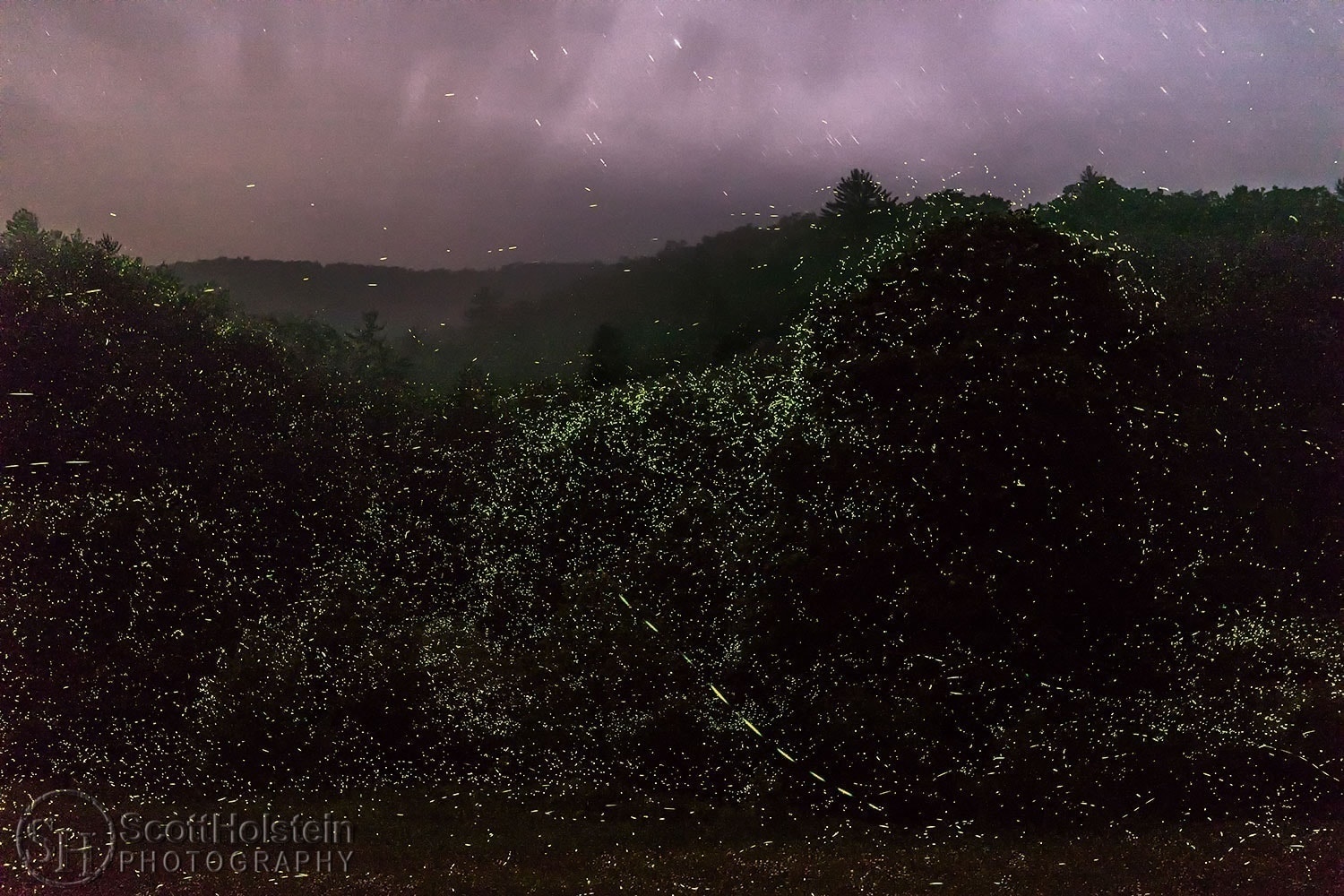 Firefly photography in the mountains of West Virginia at sunset near White Sulphur Springs. This exposure was about three minutes long.

Of course, I had to attempt some firefly photography. Photographing fireflies turned out to be a challenge, as our eyes can easily register their light, but it is harder to capture it in-camera. I used a large aperture, which minimizes my depth of field, but lets in as much light as possible. I paired this with a cable release to lock open my shutter for long periods of time, with some exposures lasting several minutes. The long exposure also lets in more light and it meant that moving lighting bugs will leave “light trails” through the images and that multiple blinks from each bug may be recorded in one frame. 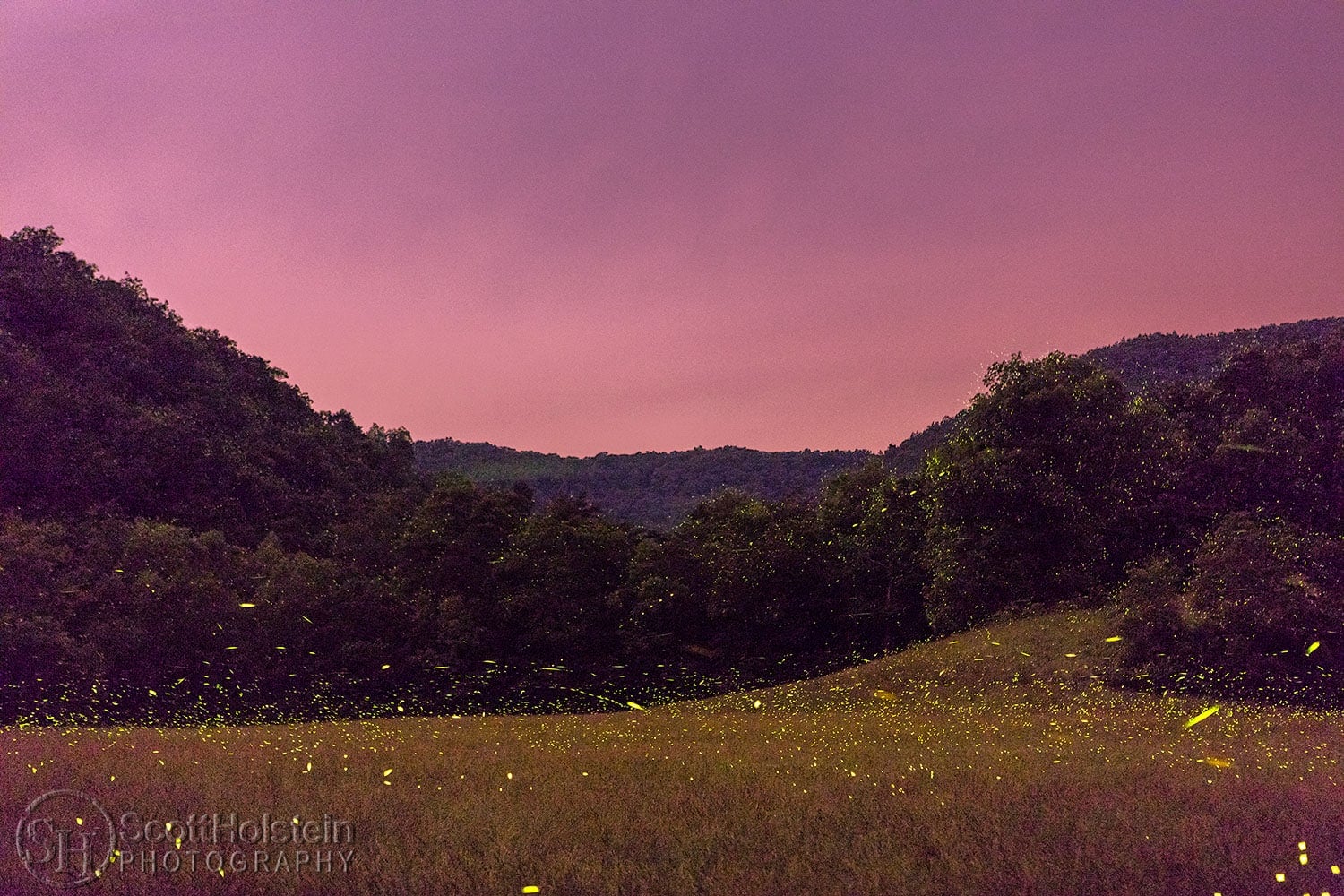 Numerous fireflies in the mountains at sunset near White Sulphur Springs, West Virginia. This exposure was about four minutes long.

The first evening I discovered and photographed the firefly light show, it had just rained and the sky was still cloudy. I returned on another evening when the sky was clear and did some more landscape photography that incorporated the last bits of color remaining in the sky from the sunset, which the long exposures reveal.

Purchase prints or contact me to license the images.

If you enjoyed my firefly photography, be sure to check out more of my landscape photography. 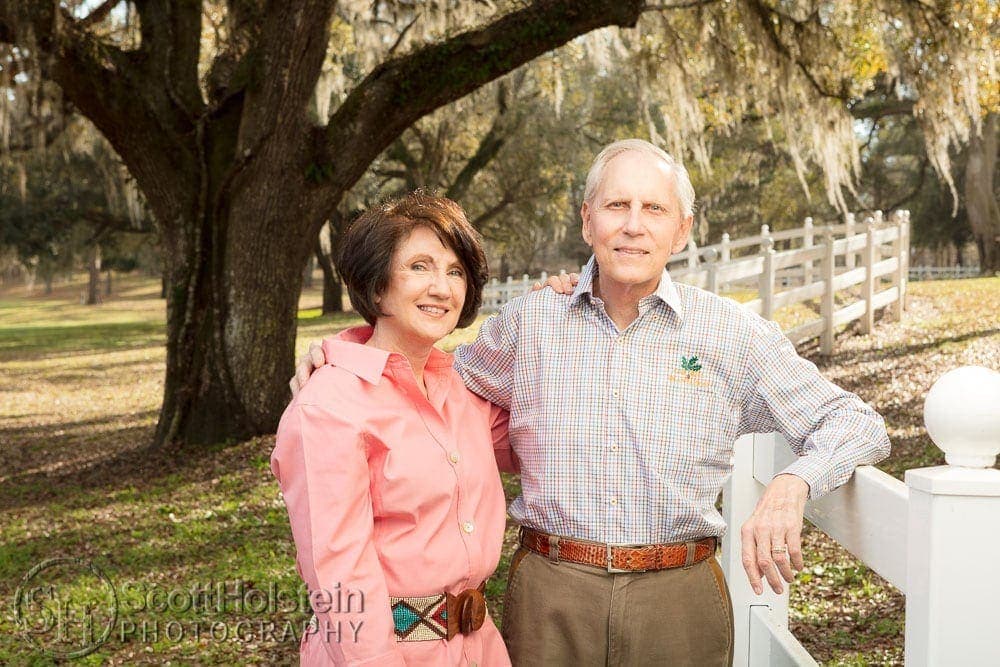 This past February, I had the pleasure of creating environmental portraits of Dr. Thomas Kent “T.K.” and Virginia “Ginger” Wetherell on their farm in Lamont, Florida. T.K. was president emeritus of Florida State University (and an alumnus), former president of Tallahassee Community College, and a former House Speaker in Florida’s House of Representatives. Ginger is a former state legislator and lobbyist.

I photographed the Wetherells alongside the winding, white fence in front of their home near Tallahassee, Florida. They were flanked by beautiful, Spanish moss-draped live oak trees. T.K. and Ginger were very kind during our photography session together and I enjoyed meeting them.

Sadly, as reported by the Tallahassee Democrat, on December 16, 2018, T.K. lost his 16-year battle with cancer. Rest in peace, Dr. Wetherell. 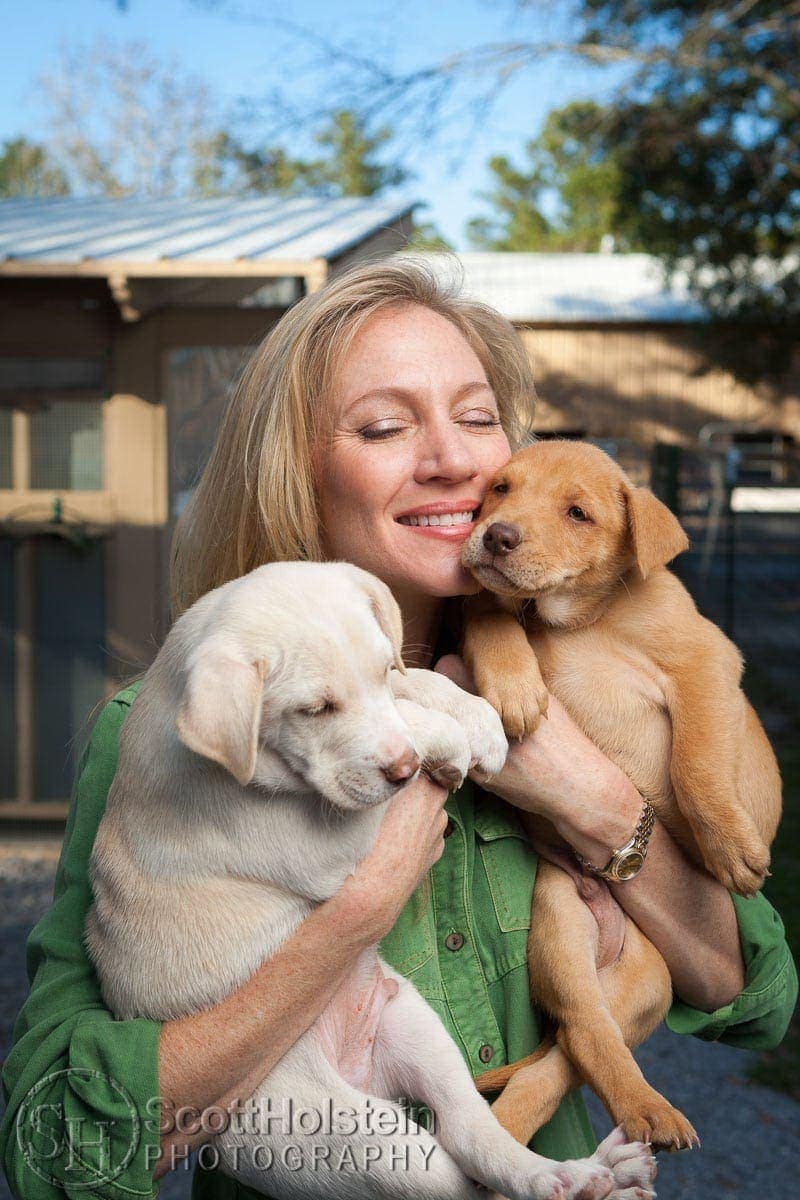 About the photo:
Placing the subjects in the shade gave me easier control over the lighting than if they were in direct sunlight. A large octa softbox at camera-right provided a soft boost of light. If no shade is available, sometimes a large softbox can both shade and light the subject.

A daub of peanut butter on Laurie’s cheek was intended to help create a moment with the puppies. However, they ignored the treat, causing my trick to fall flat. Luckily, Laurie did what she does – she loved on the animals, creating the moment that makes the photo.

See how my peanut butter trick redeemed itself on my photoshoot with quarterback Christian Ponder and his dog Dallas. 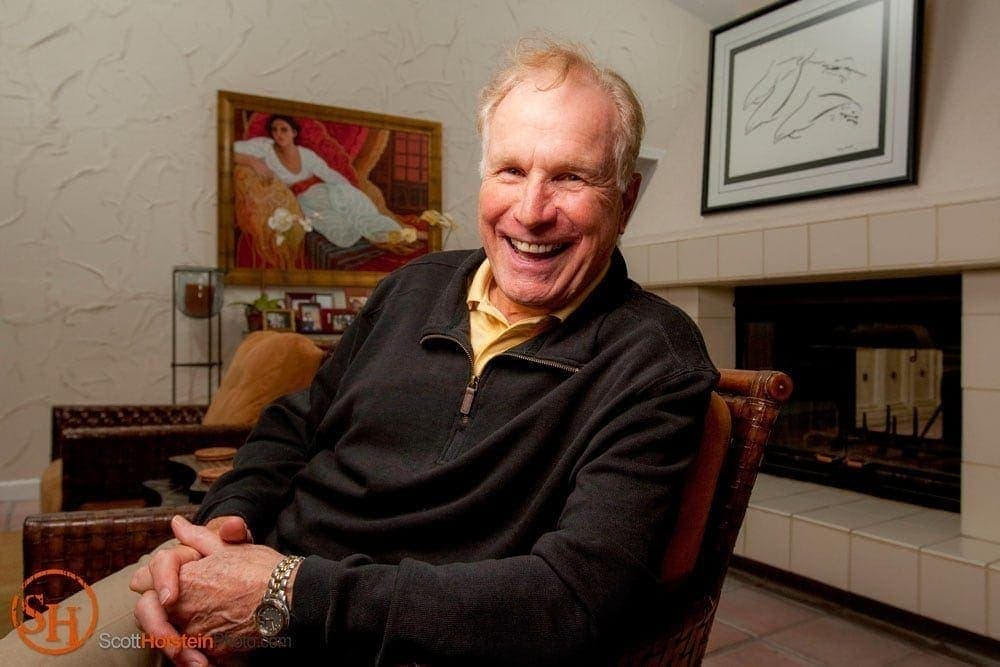 Wayne Rogers has passed away. He was an actor most known for playing Captain “Trapper” John McIntyre on the M*A*S*H television show of the 1970s. Also an investor, Rogers was more recently a regular panelist on the Fox News Channel show, Cashin’ In.

I took portraits of Rogers several years ago for a cover story in Emerald Coast magazine written by Scott Jackson. I photographed Rogers at his beach condo in Destin, Florida, during Jackson’s interview. He was kind and laid back, giving us plenty of time to complete the interview and get the photos we needed, and he even posed for fan snapshots with us when the work was done. 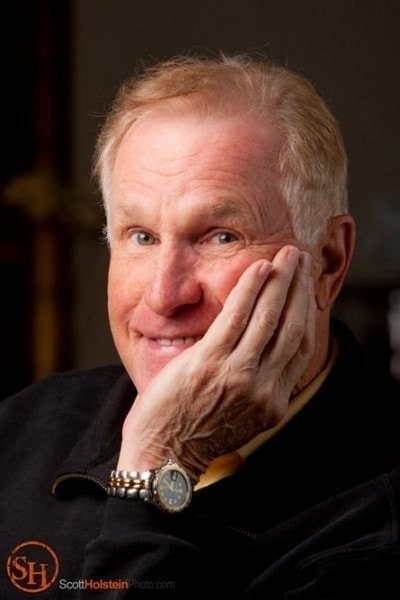 I took some unposed, ambient shots of Wayne Rogers during the interview to give the creative director and design team additional options. Then for his portrait session, I set up some lights in the living room and photographed him lounging in a chair. As is typical with photographing celebrities, Rogers was able to simply turn on the charm for the camera, which makes things easy. Lighting was simple; the main light was a small softbox in close to him at camera left. In some shots I bounced another light or two (also at camera left but further back) off the ceiling to raise the exposure of the background above the ambient level.

You never know what’s going to happen during a photo shoot on location, and this time was no different. I still chuckle when I think back on it. Wayne Rogers and Scott Jackson were sitting on the couch, just beginning the interview as I was getting my gear situated. Rogers’ wife, Amy Hirsh, came in from a walk with their two Yorkshire Terriers. One of the dogs, Capo, immediately snapped its head around and locked its eyes on Jackson. An intruder! With a warrior yap, it charged right past me and toward him, transforming from a cute, little dog into a blur of fury. I watched in curious anticipation as it leaped into the air and sailed in slow motion towards the unsuspecting Jackson. Closer and closer it flew – eyes squinting with determination, jaws wide open – until it had reached him at knee-height, where his hand rested, and attached itself to the tip of Jackson’s finger with its tiny, sharp teeth. “Yeeow!” Jackson yelped in painful surprise while jumping out of his seat. I swiftly excused myself as Rogers and Hirsh tended to him. Once out of earshot, I erupted in belly laughter while feeling slightly guilty for my delight in Jackson’s misfortunes. He was fine, of course; he had Trapper John to care for the wound.

A detective takes a smoke break while working a case into the night. Click to license or to order prints.

This image was shot in downtown Tallahassee, Florida, using traffic lights and other street lights to form the background. These lights are turned into glowing globes by using a large aperture (f/4.0) and a longer focal length (200mm) while keeping the subject (and focus) close to the camera. The ambient lights dictate my exposure.

I used four speedlights to light James, our detective model. The trick to this shot is that his cigarette “lighter,” which is casting the light on his face, is actually a END_OF_DOCUMENT_TOKEN_TO_BE_REPLACED